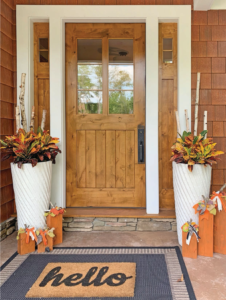 This sprawling home is on a secluded lot with breathtaking views of the reservoir it backs up to, but its interior was no match for the outdoor beauty.

Among the most notable interior changes made to this home were the kitchen, where we reconfigured a portion of it and installed a new oversized island. The previously lack luster master suite was another area that received a complete transformation. In the main living spaces, all new floors were installed and major structural changes took place to eliminate the abundance of columns that were in the existing plan. The basement was refinished and a game room and workout room were added.

Overall Before & After – First Floor

The kitchen portion of this whole home renovation was all about having a better functioning island and a more sensible layout in regard to the refrigerator, pantry, and coffee bar. The farm style sink was replaced with a charcoal grey under-mount sink for easier cleaning, and the new faucet has convenient hands-free technology. The microwave was conspicuously moved into the island and large column style legs anchor each end to create a stately furniture look.

This kitchen always had an open floorplan, but it lacked the dynamic interior styling the new owners longed for. The white perimeter cabinets were salvaged, but modifications had to be made to f it the new side hinged double ovens. New backsplash and quartz countertops were installed, along with a new induction cooktop. Angled power strips with USB were tucked under the cabinets to avoid any outlet plates interrupting the unique pattern of the backsplash.

The largest structural change in the kitchen was the reconfiguration of the entry door into the kitchen from the garage, along with relocation of a bathroom to make room for a walk-in pantry and coffee bar. The original refrigerator was on an angled wall. This wall was straightened out, which opened the floor plan to allow better access to the refrigerator and eliminate the awkward angles.

Now that the once underutilized full bathroom was removed, a new powder room was designed off the back-hall entry from the garage in conjunction with a small mudroom space. These empty nesters frequently entertain friends and family and they wanted a sophisticated powder bath in a more appropriate location in the home.
They chose to use dark cashmere finishes combined with a stacked stone accent wall for added dimension and texture to the room. A back-hall closet was kept for bulk storage, while a bench area was added to increase the organization and storage near the doorway that was used most often to enter and exit the home.

OVERALL BEFORE & AFTER MASTER BATHROOM

The master bedroom suite was another area of the home that was lacking function. The bathroom itself was spacious, but the original design left a lot to be desired. There were two pedestal sinks with virtually no usable counter-space and a pedestal style tub that the owners found very difficult to get in and out of. They were also in need of better lighting and a more updated shower that was easier to access, keep clean, and enjoy.

The door to their walk-in closet was relocated, making more wall space for a run of cabinetry with double lavatory sinks. Wall mount faucets were used to keep the countertop clean and clutter free, while in-wall lift up mirrors were added to provide storage, nightlights and hidden outlets for electric toothbrushes and plug-in razors. His and hers pullouts were installed in the center of the unit so they each have their own space for electric styling tools. The upper cabinets have antiqued mirror fronts, adding to the “refined rustic” style of the quarter sawn cabinetry.

The soffits were removed and the shower was expanded to flow into the deck of the new tub, which created a bench area extending into the shower. The floor joists were modified to allow for a barrier-free shower. The glass panels were taken to the ceiling to accentuate the height of the 9’ 0” ceiling and to stabilize the glass since the owner opted to not have a door to the shower.

Creating the proper slope for the shower to make it zero-entry presented challenges, given its close proximity and angle with the tub deck.

One of the clients’ primary goals for this project was to eliminate the obstructive columns that separated the dining room, family room, and foyer. The columns were also directly in the walking path to the master suite, which required walking through their dining room every time they went back and forth.

These poorly placed columns were holding up a large portion of the second floor and roof and therefore created one of the most significant challenges of this project. In order to create the free-spanning beam that would cover the entire space without any post, a 16” steel flitch plate was fastened between two 27’ LVLs.

Getting the 27’ long LVLs into the home took an army of 10 men and lots of patience and maneuvering. Once inside the home the steel plates needed to be welded together and fastened to the LVLs.

The left point load supporting the new beam required an additional post and footer in the basement. While digging the large footer it was discovered that this was also the intersection of multiple plumbing drain lines. They all ended up needing to be relocated and rerouted presenting many unforeseen plumbing challenges.

The wall of columns separating the dining room and foyer was filled in to allow for more privacy and symmetry in the dining space. The clients are thrilled with how open the space feels now, and love their pleasant, uninterrupted walking path to their master suite.

The home originally had cork flooring throughout the entire first and second floor, but the homeowners really wanted to have hardwood throughout that would hold up better over time. They opted for an unfinished, engineered wide plank oak with a mellow grey/natural tone. A character grade plank was used which had some natural knotting and burl wood. This felt right for the homes wooded setting.

To continue the update throughout the home, the wood banister and balusters were refinished to match the flooring. In the foyer, a wall was added to separate the dining room from the main entry, which created an anchor for furniture and art as guests enter the home.

The lower level of this home was also remodeled to achieve various zones for different functions and guest interactions. The goal in the main entertainment room was to create a warm and inviting space with a fireplace and two large TV’s for watching football on game days. The stair wall was extended to create room on the viewing wall and a new gas fireplace was installed with a blue washed brick, which was also used on the television wall. A reclaimed beam was used for the fireplace mantle and grass cloth wall covering, which we used throughout the room to add texture and warmth. The cabinetry has a grey blue wash, which was also used on the wainscot paneling around the room and half columns flanking the fireplace.

The wet bar on the left-hand side of the before-picture below (with a TV on it) was flipped to be on the other side of the wall for use in the new exercise room. The remainder of the wall and stairwell was filled in to house the main entertainment hub for this room. All of the television equipment is tucked behind the wall on the left-hand side and is easily accessible in the unfinished portion of the basement.

The other side of the lower level, which was unfinished, was designed to be a game room for slot machines and other game units. The back half of this area was turned into an exercise space complete with a Peloton bike, treadmill, elliptical, and various free weights. A small counter with a sink and refrigerator were also included in this room. The rubber flooring makes it practical for use, while the glass entry wall invites you in as you come down the stairs.

Nearly every square foot of this sprawling 5,500 square foot home was impacted by this renovation. The entire second floor received new flooring and paint, and this bonus room above the garage (pictured below) above the garage was finished to be a playroom for when the homeowners grandkids came to visit.

The poorly constructed deck at the front of the home was sagging and had an ongoing animal infestation. In order to rectify both of these issues a new concrete stoop was installed.

The homeowners also wanted a new front door that would let in more natural light. This custom designed front door was made to match the existing sidelights while also giving the entry a more formal feel.

Overall this entire house renovation completely enhanced our clients’ home, bringing it up to par with its spectacular property and up to the standards of their style. This project received the 2019 Contractor of the Year Award for an Entire House over $500,000.

Dave Fox is an employee owned company who makes our clients our number one priority. We design and build entire house remodel projects for our clients in Central Ohio and deliver the best value through exceptional craftsmanship, excellent materials and ethical business practices. Contact us today to learn more!